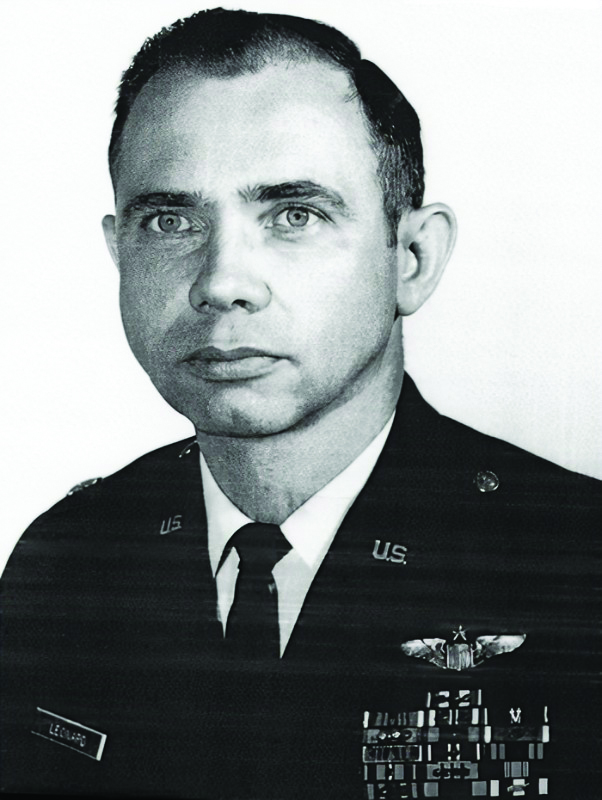 In May 1973, Winlock hosted a local hero with Christmas in May. Major Edward (Ed) Leonard served in the Vietnam War and was also a prisoner of war (POW) for 4 years and 8 months. Today, the Winlock Historical Museum was fortunate to receive and display many items, photos and other memorabilia from that day.

It was May 31, 1968, Ed Leonard was a pilot, he was flying a propeller-driven Skyraider. He liked flying missions. He enlisted once more; it was his last months. He was due to return home within 8 weeks when his plane was shot down over Laos. It was then that Ed became a prisoner of war. He was actually held captive in Hanoi, North Vietnam. Ed, serving a 13-month sentence at the time of his capture, had already received several medals. He was decorated with two Silver Stars, three times with the Distinguished Flying Cross and a Purple Heart. He was in the Air Force, but he was our hero.

Ed Leonard was not on any POW list; his name had been omitted. Then there was a list of seven men who weren’t on the original list, Ed was one of them, he was coming home. Ed returned to the United States on March 27, 1973 at Clark Air Force Base.

Tommy Thompson, president of the Winlock Historical Museum wrote about his experience that day. He said: “My memories of coming home to Eddie Leonard are fond memories that are wrapped in a shroud of nostalgia. It happened towards the end of my 4th year, and being all 11, I’m sure that I didn’t.

understand the true meaning of the efforts made by our fellow citizens to welcome him into their homes. I remember how cool it was to be in the herd of kids heading uptown on a Friday afternoon instead of being stuck inside the old elementary school. A feeling better than seeing the movie projector rolling around the classroom. I knew we would have fun all afternoon. And an airman by the name of Eddie Leonard was the reason.”

As students in 1973, we knew it was important for us to be excluded from school. Tommy Thompson explains what most of us felt that day, he said: “I had a vague idea that he was a POW in Vietnam. couldn’t you understand that?”

Winlock was different back then, Tommy continued, “At the time, downtown Winlock was a bustling town and all the storefronts were full. But the transformation that happened for Christmas created an almost magical atmosphere. The high school’s art department painted all of the store windows with snowy Christmas themes.The twinkling garland banners that spelled Merry Christmas and Happy Holidays strung the streets and came to life at night with the colorful glow of the Christmas lights. And even more Christmas lights in stores. Miss?”

Moreover, at that time, Winlock had a family atmosphere, it was not a small event. Tommy Thompson said: “So that’s what our town did. We created Christmas in May. But we went further. What good is a parade without an orchestra? Mount St. Helens High School (aka Winlock High School The marching band led the parade wearing Santa hats and playing Christmas music And we all gathered in a parking lot where the bank is now, a podium at the south end where speeches were given spoken by people a 4th grader didn’t know and probably didn’t pay attention to anyway. It wasn’t until later in life that I came to understand how important that day was. only for Eddie Leonard, but also for our community. Winlock really transformed himself that day to welcome one of his own. But that’s how we’ve always operated here at Winlock. We take care of our own. We take care of our own. have always done. When bad things happen to good people, we We always seem to come together to help. I have seen this happen several times. like these that give us the feeling of belonging to this community.”

I was also a student who was able to attend the event, so I thought I would share as well. A few days before many had decorated their homes for Christmas, it was truly a community transformed for a hero’s welcome. I also remember being in the gravel court while speeches were being made. I was shocked at how many camera crews were there to capture the moment. The students were in front, some of us had our parents with us. I remember how excited my mother, Diana Hoffman, was for Ed Leonard to come home. The city was filled to the brim, people came in droves to see our hero be the Grand Marshal for that day. I also remember the people, everyone was thrilled to see Ed. It was a day I haven’t seen since, a hero’s welcome.

After the war, Ed Leonard became a lawyer and resided in Ilwaco. He eventually became the mayor of Ilwaco, serving from 2002 to 2006. He was a real public servant in many ways. He was the kind of humble man, he had been a prisoner of war and he knew what other people had been through. Ed passed away a few years ago on Veterans Day at the age of 76. What an amazing life and person.

The Winlock Historical Museum was started in 1996. The addition of the Ed Leonard memorial in the museum is absolutely worth the trip to the museum. Highly recommend a visit to the museum as there is a lot about the history of the city.