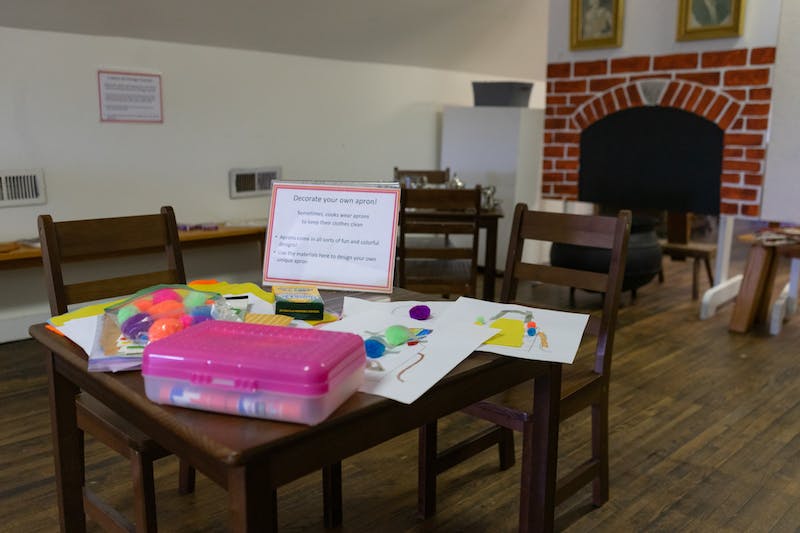 On Sunday, the Orange County Historical Museum will add a children’s gallery for children ages 3-7.

The gallery will be called Kids’ Space and is expected to be a permanent addition to the top floor of the museum.

The space will feature five different stations, each allowing children to connect their current lives with those of the past. These stations focus on food, school, currency, native animals, and crafts.

Since its opening in 1957, the museum has strived to enlighten and engage community members and visitors, according to their website.

And the new children’s area plans to build on that.

Tanya Day, the museum’s site manager, and Courtney Smith, the exhibits and programs coordinator, began considering the idea of ​​a children’s gallery when they realized the lack of resources available to families.

Together, the couple came up with the final idea for the children’s space.

Day said the space was created for kids to learn about Orange County history while having fun.

“Looking closer, not just in Hillsborough but in Orange County as a whole, there really aren’t many free educational offerings for families, especially young children,” he said. she declared.

Through the new gallery, Day said children will have the chance to create their own money, touch animal fur and tracks, experience what it was like to go to school a while ago. decades and more.

“It’s hard to bring a kid into a museum and say don’t touch, don’t touch, so here’s a space where they can touch,” Smith said.

Missy Julian-Fox, former educator and current board member of the Chapel Hill Historical Society, said it was important for children to be active participants in their learning process. She said the space will be important in connecting children to their environment and developing their identity.

“I think it’s really essential that we have spaces like this,” Julian-Fox said. “I really congratulate them for taking a step in this direction.”

Smith herself has worked to create inclusive children’s books. She is in the middle of a series of books that features dogs as main characters who live in Orange County through different decades.

The first book in the series, titled “Minnie Finds a Home”, has been published. Set in Cedar Grove in 1905, the book focuses on a collie puppy’s journey to adoption.

At the opening of the children’s space, retired Orange County teacher Victoria Pheribo Mattison will read “Minnie Finds a Home” to attendees.

Smith said her book series combines learning about fiction and non-fiction. In writing, she intended to eschew traditional gender stereotypes to create an inclusive space for children of all gender identities.

“Instead of using girls or boys, or worrying about gender, we were telling stories featuring dogs,” she said.

Sunday’s event is just the beginning for the Espace Enfants. Day said she hopes to expand the gallery in the future.

“We’re excited to continue to grow, expand it, add more interactivity, more text, more opportunities with it, hopefully throughout the next fiscal year,” she said.

The opening event is free and no pre-registration for in-person viewing is required. The “Minnie Finds a Home” reading will also be streamed live on Zoom at 2 p.m. Registration is available at this link.

To get the day’s news and headlines delivered to your inbox every morning, sign up for our email newsletters.