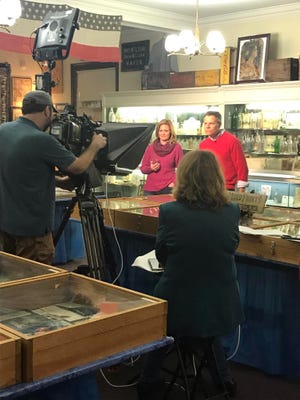 It would be on April 9, 1975, that the Summersworth Historical Society would hold its first meeting. Little did they know that nearly 50 years later, what they started that day would become a legacy of Hilltop City and its long and industrious history.

The society originated from the idea of ​​the Somersworth Women’s Club, which incidentally is Somersworth’s oldest club and is alive and well today. The Women’s Club was looking for a project for their community improvement program. Although many ideas were discussed, only one seemed to matter more than another. The band decided to create a historic club for Somersworth and the rest, as they say, is history. I’m pretty sure the women and members of that original club would have no idea what was to follow in later years.

For many years, members of the society collected memorabilia, artifacts and photos of Somersworth. For many years these items were stored in the public library where the society also held meetings and a series of lectures.

In 1978 the society made plans to convert the old fire station at the top of Grand Street into a museum. The building itself was historic, having been built in 1880. A grant was secured and members of the society prepared to roll up their sleeves and get to work. Fate, however, had other plans and the fire station fell victim to a fire and was unfortunately reduced to a heap of smoldering rubble.

Although the society was saddened by the event, they continued to meet and collect many items that ended up in the library’s attic, which was now the society’s storage location. This would continue until member George Poulin, who incidentally was a Dover transplant, became actively involved in the society.

At the city council meeting on March 18, 2002, Poulin, who was then president of the Historical Society, asked the city council to consider allowing the use of the Old City Hall on Main Street as a museum. for Somersworth artifacts and memorabilia. Although some locals thought he was a little crazy and were convinced the city wouldn’t just give the corporation use of an entire building, that’s exactly what happened.

Poulin and other Society members, including Eric Mommsen and Frank Kennedy Jr., set out to create what we know today as the Summersworth Historical Museum. You can find the museum at 157 Main St. and what started out as a two-room museum when it officially opened on August 10, 2020, now takes up the entire building and includes 19 rooms that are filled with memorabilia from Somersworth’s proud past.

Admission to the museum is free, but donations are always gratefully accepted and appreciated.

This year the museum will be 20 years old and it is planned to celebrate the event in August. A classic car exhibition and open house is scheduled for August 14, 2022. As an active member and director of the museum, I will be forever grateful to George, Eric and Frank and all who have come before us over the years . who made the museum possible.

Recently, WMUR’s NH Chronicle hosts Sean McDonald and Erin Fehlau visited the museum, and the program will feature multiple rooms throughout the week of April 11-15, beginning at 7 p.m. The museum itself will be presented on April 12. and will give viewers a glimpse into Somersworth’s proud past. The museum is open every Sunday (except public holidays) from 12:30 p.m. to 3:30 p.m. and we would love to see you there. You can also follow the museum on its Facebook page: www.facebook.com/summersworthmuseum.

Saint-Ignace Parish Community Breakfast: St. Ignatius Parish will hold its monthly community breakfast in the basement of St. Martin’s Church on Maple Street on Sunday, April 10, from 8:00 a.m. to 10:30 a.m. All are welcome and breakfast at will cost just $9 for adults, $3 for children ages 7-15, and free for children under 7.

Easter Egg Hunt Fun: The Somersworth Recreation Department will be holding their very popular Easter Egg Hunt at Parc Jules Bisson on Friday April 15, for ages 2-12. No need to pre-register for this free event, but don’t be late; the hunt begins at 4:30 p.m. sharp. Rumors abound that the Easter Bunny will also make an appearance.

Municipal parks reopen: All parks in the town of Somersworth as well as the agricultural facility in Malley will reopen to the public on April 11.

Coffee with a cop: The very enjoyable community event returns to Hilltop City. This time you are invited to meet the local police department on Tuesday April 19 at Dunkin Donuts, 89 Whitehouse Road. The fun runs from 8am to 10am and they hope to see you there.

That’s all I have for now but I’ll be back soon. Until then, continue to be kind to each other because you never really know what someone else is going through.

Jenne Holmes is from England and has lived in Somersworth for years. Her passion for history and her love of writing led her to the Summersworth Historical Museum, of which she is now director. She can be contacted at [email protected]