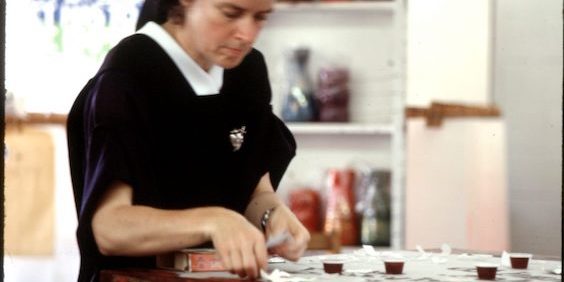 In a unanimous vote, Los Angeles City Council granted historic status to the former studio of Sister Mary Corita Kent, the renegade nun, pop artist, activist and educator whose bold and colorful screen prints hijacked commercial images to preach ideas of social justice, peace and love amid the political upheavals of the 60s and 70s.

The integrity of the modest concrete block structure, located at 5518 Franklin Avenue in Hollywood across from the Corita Art Center, had been maintained for years during its second life as a dry cleaner. The building was due to be demolished in 2019 when a developer wanted to raze it to create additional parking spaces for an organic health food store project. In response to the threat, the Corita Art Center launched the “Save Corita’s Studio” campaign with a rally of concerned citizens in August last year, and submitted a request for a rapid response for monument status to the Commission du Los Angeles Cultural Heritage (CHC).

Born Frances Elizabeth Kent in 1918, Sister Mary Corita took the habit at the age of eighteen, joining the order of the Sisters of the Immaculate Heart in Los Angeles. She studied at the Chouinard Art Institute (now CalArts) and taught children on an Inuit reservation in British Columbia before joining the art faculty of Immaculate Heart College, where she invited artists and artists. luminaries like Alfred Hitchcock, Buckminster Fuller, Charles and Ray Eames at conference. Although Kent had already experimented with screen printing when she took his students to visit Andy Warhol’s inaugural exhibition in 1962 at the Ferus Gallery, the encounter proved crucial to his artistic training, inspiring him to remix Appropriate logos and advertisements with biblical passages, fragments of modernist poetry, and messages of solidarity with the anti-Vietnam war, civil rights and women’s rights movements. Kent’s activism gradually revealed tensions between his leftist politics and the Archdiocese of Los Angeles, which qualified his work as sacrilege. Kent left the religious community in 1968; she moved to Boston and continued to do art under the name Corita Kent until her death from cancer in 1986.

“The joy of his job, his tumultuous color, was his gift to a good and gray world,” wrote his friend, the radical Jesuit priest and peace activist Daniel Berrigan of his legacy: “It seemed that in his art the juice of the world was running, flooding the world, shattering the rotten wineskins of appearance, decay and decay.

Currently, only 3% of historical and cultural monuments in Los Angeles are associated with women’s heritage. Nationally, just 8% relate to the stories of people of color and women combined. “The Los Angeles City Council that is giving Corita’s studio historic status is a critical step in addressing this disparity,” Corita Art Center director Nellie Scott said in a statement. “This work to defend the legacy of women artists and cultural leaders is underway in Los Angeles and across the United States, Corita reminds us that hope is not just optimism; hope is hard work. Hope is showing yourself every day for others. As we emerge from this pandemic, we will need spaces like the one at 5518 Franklin Avenue. “