Saint-Denis is the most historic church in Menlo Park

St. Denis is a church in Menlo Park that has sprung up in many places over the years. Its first incarnation came in 1853 when Dennis Martin, a young Irish immigrant who had started a lumber business along San Francisquito Creek, built a church for family and employees near what is now Sand Hill. Road. 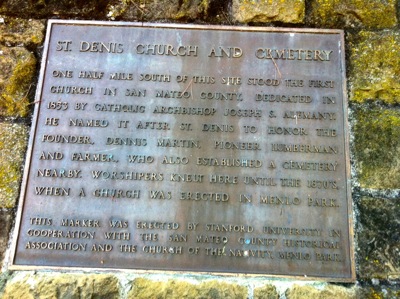 When the Church of the Nativity opened in 1872, Saint-Denis ceased to exist and it was approximately 80 years later that a historic monument was erected to commemorate both the church and the cemetery. adjoining. (The remains were moved to the Sainte-Croix cemetery.)

“What I understand is that the original wooden church was set on fire,” said Father Jose Shaji, the current pastor of Saint-Denis. “Then the family farm donated the money to build Our Lady of the Roadside in the Portola Valley. The two congregations continue to share certain events today.

Saint-Denis itself became a parish again in 1961 with services first held in the Sharon Mansion before a new church was built at its current location on Avy Avenue in Menlo Park. When Saint-Denis celebrated its 150th anniversary in 2003, the church’s original patio was renovated.

The original St. Denis Church painting by Rachel Bentley is on display in the St. Denis Parish Hall; photo of historic landmark courtesy of the Menlo Park Historical Association.