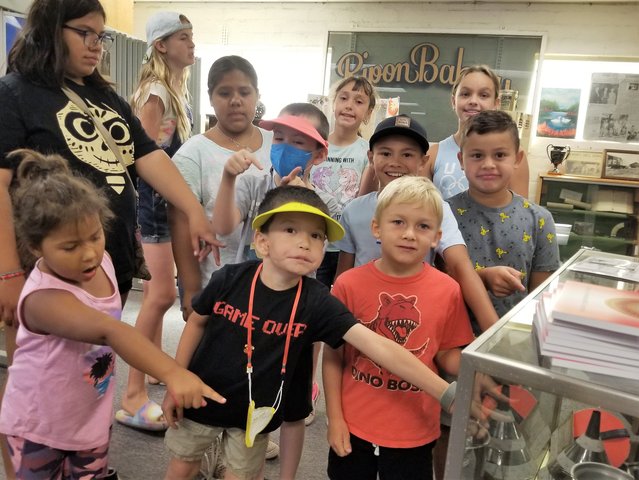 Kids Craft Day at the Clarence Smit Museum was back on Tuesday.

Thirty-eight young locals aged 5 to 10 enjoyed a morning of arts and crafts, a scavenger hunt and a free lunch.

In addition, they were able to explore the local museum with their parents.

“We thought it was time to bring it back,” said Clarence Smith Museum curator Connie Jorgensen.

She, along with the guides and a few volunteers – including young teens Kate Vander Veen, Anna Palafox and Olivia Apfel – led the way, providing the children with a choice of crafts to decorate their brown paper bag.

The scavenger hunt turned out to be a great opportunity for all participants to explore their local museum.

They scoured different sections of the building, looking for items such as an instrument to cut off a horse’s tail, sharpen straight razors, or firefighters to put out fires.

It also gave everyone involved a chance to explore many of the museum’s exhibits – the bakery, drawing room, school section, kitchen, doctor’s office and barbershop.

Kids Craft Day, moreover, allowed young people to lead the way by bringing their parents to the museum.

“Children are the ones leading the way (in the museum’s introduction) for adults,” said John Mangelos of the Ripon Historical Society.

He credited Jorgensen for his efforts to bring the event back after a nine-year absence.