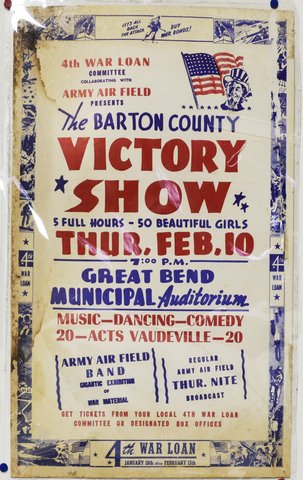 As Veterans Day approaches, at least two elementary school groups have planned field trips to the museum next week.

Lartz reminds visitors that the museum has moved to its fall and winter hours beginning Nov. 1 and is open 10 a.m. to 5 p.m. Tuesday through Friday. The museum is located at 85 South US 281, just south of the Arkansas River Bridge in Great Bend.

The war at home

A WWII exhibit for Barton County wouldn’t be complete without a mention of Great Bend Army Air Force Base. The following information can be found at the museum.

On September 30, 1942, it was officially announced that an army airfield would soon be built west of Great Bend. Originally intended to serve as a satellite base for the Smoky Hill Army Airfield at Salina, initial plans were limited in size and functional utility. Construction began immediately, with essential buildings and runways being completed first.

Designated to deal with and train intensive bombardment groups, the GBAAF would eventually be assigned to the 58th Operational Bombardment Training Wing of the Second Air Force. Expanded to serve the vital mission of training Boeing B-29 bomber crews, from 1944 until the end of World War II, the GBAAF trained the crews of our heavy bomber groups: the 444th, 498th, 19th and 333rd. Additionally, the 489th was sent to the GBAAF on its return from the European theater for advanced training in preparation for reassignment to the Pacific theater.

Due to a shortage of new B-29s, for several months crews were trained using the B-17 and B-26 bombers, as well as a few B-29s. These efforts are often called “the Battle of Kansas” for the hard work done by Boeing crews and employees to remove gremlins from these new planes.

With the end of World War II, the GBAAF was mothballed and then deactivated. The runways that once saw the birds of war take off now serve as the Great Bend Municipal Airport.