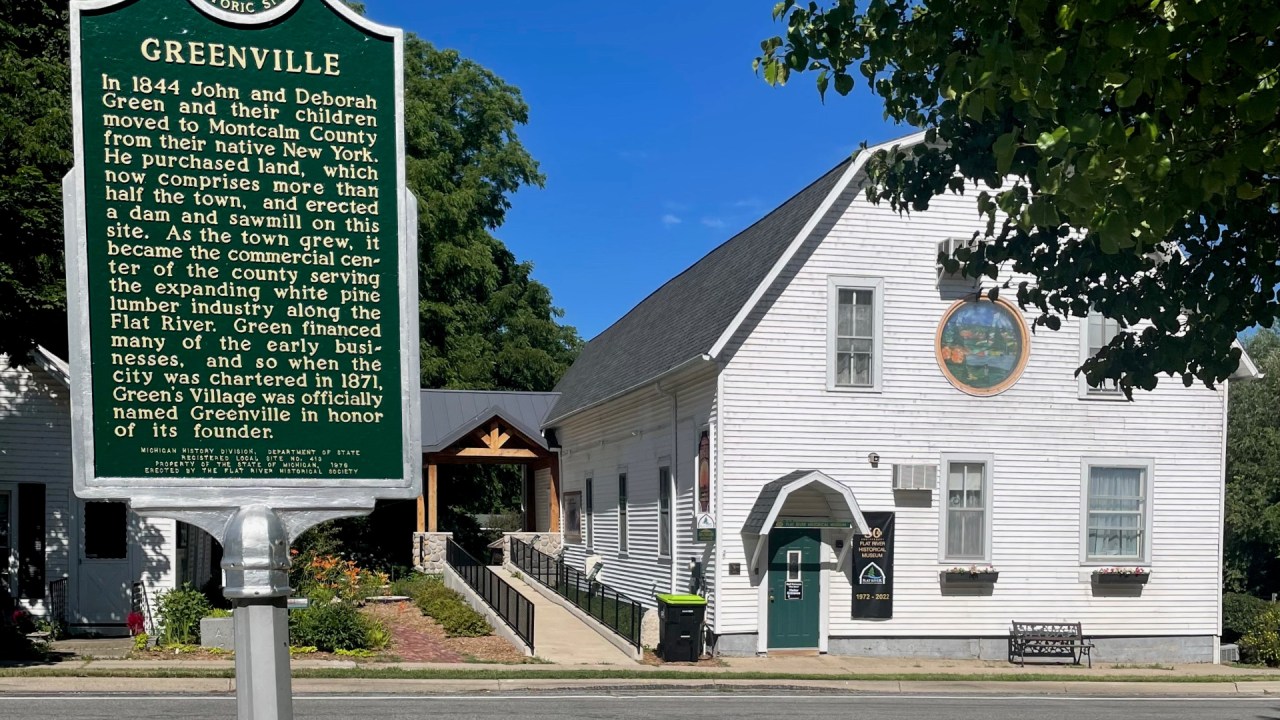 GREENVILLE, Mich. (WOOD) — Celebrating its 50th anniversary, the Flat River Historical Society and Museum looks forward to telling the stories of Greenville for another 50 years.

Opened on October 10, 1972, the Flat River Historical Museum in 213 N. Franklin Street near rue Montcalm, has spent the past five decades inviting customers to take a walk back in time.

“The museum is located where our first white settler, John Green, settled. He built a sawmill where the museum is,” said Keith Hudson, president of the Flat River Historical Society. “A stable was built on this site to supply horses to a sawmill which was just across the street.”

Years later, TJ Ridley bought the building and used it for cold storage — mostly eggs, Hudson said. After a fire destroyed the building in 1904, it was rebuilt a year later on the existing foundations that would have been laid in the 1870s.

Inside the current museum, visitors learn about the history of Greenville.

“We have a great Native American heritage, the fur trade, logging – we were actually a logging town, that’s how we started. Manufacturing, agriculture moved in, right away actually,” Hudson said.

From the United States’ Potato Capitol to the Refrigerator Capitol, Greenville’s history and nicknames span a wide range of industries.

“We’re just a very diverse community and we’re trying to bring it all together,” Hudson said.

On the main level, the museum is presented in chronological order with visually stimulating and interactive exhibits.

The museum even has an exhibit on Meijer, who was based in Greenville in 1934.

On the upper level, patrons can wander down a recreated main street and peek into period pieces such as a general store and barbershop that feature two of Hendrik Meijer’s barber chairs and his tools.

“We also have three original shopping carts that Meijer used when they opened,” Hudson said.

On the lower level, guests get a glimpse of harness making, carpentry and blacksmiths at work in their workshops.

Outside the museum there is a Victorian garden with interpretive panels.

“We have a brick path that meanders, and the bricks came from the original streets. They were laid in 1910 in Greenville,” Hudson said.

The museum is open from mid-April to November on Saturday and Sunday from 2 p.m. to 4:30 p.m. During the summer, a series of concerts takes place across the street and the museum opens an hour before. Hudson said private tours are also an option.

On Monday, October 10, the museum is holding a 50th anniversary celebration with a new dedication at 6:30 p.m. – coinciding with the opening of the museum. The event will feature dignitaries, presentations, a time capsule, refreshments and museum tours.

*Editor’s note: This article is the start of a series on woodtv.com highlighting small museums in West Michigan. The following articles will be published in the coming weeks.